For almost 2 years, I worked on the Klarna Card: our answer to the credit card. Klarna’s setup allows designers to work closely with product managers and engineers. You get the chance to really own your part of a Klarna product while being supported by analysts, marketing experts and — if you’re lucky — researchers. As a product team, a lot of the initiative is in your hands so the below is a high-level overview of the things we accomplished as a team. ❤️

While I was the only designer for the Klarna Card, I was part of the Klarna App design team and worked together with our Design Lead and ~6 other designers within the App. We are also supported by an extensive design system built by our Design System team.

The Klarna Card is Klarna’s flexible VISA credit card. It allows you to choose whether you want to pay right away or use Klarna’s ‘Buy now, Pay Later’ for anything, allowing you to pay 14 days later. The Klarna Card connects to the bank account you already have and gives you full control over your purchases in the Klarna App.

When I joined, the Klarna Card had been launched in Sweden earlier that year.

Get the user’s perspective: you can read this blog post about the Klarna Card sign-up we launched in Germany!

The Klarna Card was launched in an early stage and as our feature set grew, so grew the settings a cardholder could customize. Early on, I cleaned up the settings page by grouping similar functions (actions vs settings). We also launched Apple Pay and Google Pay.

At the same time, our Brand and Design System teams were working hard on updating the Klarna style, resulting in a more sleek and contrast-rich UI. The Klarna Card itself also got a visual update, moving from the large K design to a vertical design in different colors with different quotes.

In September 2019, the Klarna Card team officially became multiple teams and with that, we could work on more things at the same time. One of the larger initiatives was the new ‘Card Home’ to give our customers more insight into their card usage because more and more people were using it as their primary or secondary payment card.

We gave the card its own transaction view and moved settings to its own page as the list grew. Analytics helped us determine which important actions we should keep at the first level.

Signing up for the Klarna Card

The sign up for the Klarna Card is arguably one of the more important things we’ve worked on. 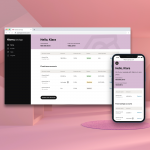